Well, That Was Fun! When’s the Next Standoff? 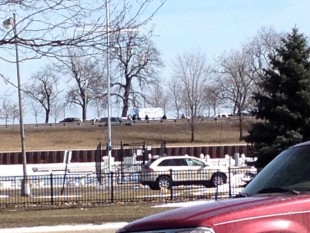 We started yesterday listening for some possible South Side Irish Parade mayhem, but instead ended up standing out in the cold just west of LSD watching a barricade situation unfold.

“Police late Sunday took into custody a Chicago-area man wanted in connection with his wife’s killing in Georgia after police pursued his car from suburban Harvey to North Lake Shore Drive, where the car crashed and a standoff paralyzed the busy roadway.

Harvey police located the vehicle, which fled from officers about 12:27 p.m., beginning a chase on highways and interstates in the south suburbs and on the South Side of Chicago. Eventually the vehicle ended up on South Lake Shore Drive, and then North Lake Shore, where it crashed a little before 1 p.m. near Fullerton Parkway. The dark-colored car came to rest in the grass just to the east of the northbound lanes there and police were seen surrounding it with guns drawn, pointing at the vehicle.

Multiple witnesses said police fired on the suspect vehicle after a crash about 1 p.m. involving the car being pursued and a confrontation with police.”

We’d like to add that we have the scanner audio of the CPD saying that shots were fired.

PS – It was fun, yet freezing, to be apart of this. If only the pics were better, the tweets were more frequent and the ol’ iPhone didn’t crap out after a couple of hours.

Keep it short and to the point. Name calling and similar stupidity will be deleted. If you insist on writing several paragraphs, start your own blog.